In this long-lasting journey, the bikers have entertained thousands of spectators of their time. And the world has experienced all the dauntless drivers who don’t care about any obstacles on their way.

In this article, we will discover the epic evolution of this motorbike championship. We will try to find what changes have taken place in events, schedules, classes, tracks, and terms of this competition over time. 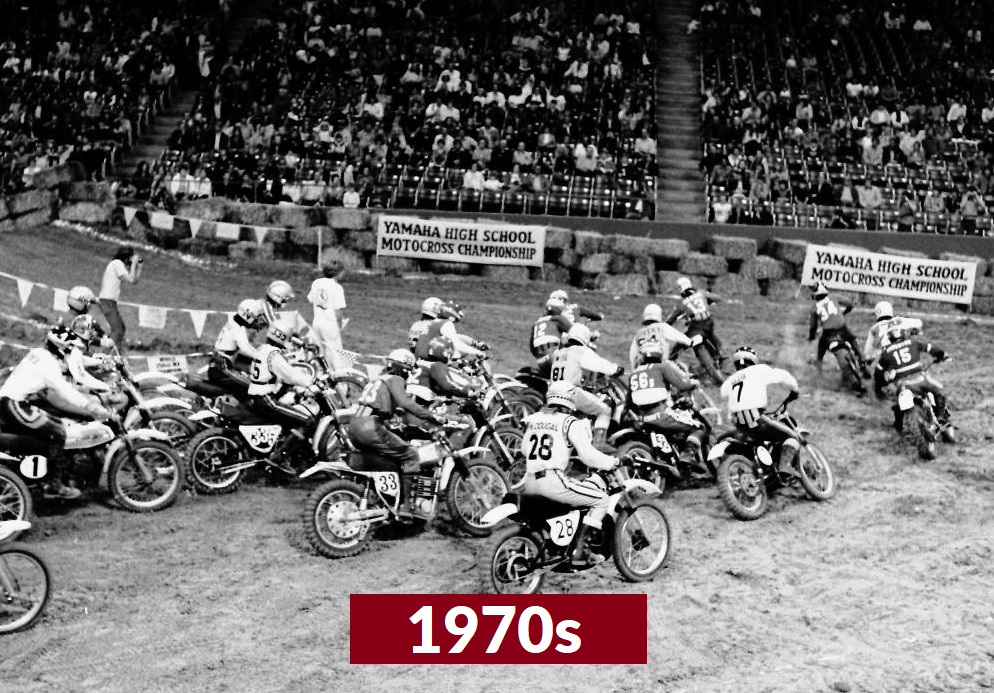 A Brief History of Beginning!

Let’s look back to the year 1972 when the world racing lovers became the witnesses of a new racing-type ‘The Superbowl Motorcross’. This first Superbowl took place in the Los Angel Coliseum with a new adventurous ambiance for thousands of spectators.

The first successful Superbowl lead the American Motorcyclist Association (AMA) to arrange the inaugural season of supercross in 1974. In this particular event, the bikers competed for three sanctioned races over several weeks.

If you are a regular follower of the supercross, you have probably heard the name, Mike Goodwin. In 1972, he played the potential role to launch the off-road motor race show inside the stadium.

Before 1972, it was almost unthinkable to install the bike racing tracks in the closed-door stadium. Mike Goodwin brought his idea to implement the indoor racing tracks inside the Los Angel Coliseum.

In this sense, Mike Goodwin will receive the credit to create off-road motor race tracks in the United States of America. Then the man who came into the spotlight, Tom White.

In the early years of Motorcross, people weren’t so excited about indoor racing shows. Tom White played a pivotal role to make the event popular among the mass people across America.

Undoubtedly, Larry Huffman will stand on the contributors’ list as an announcer to spread the message of the event across the country. He made all the traditional seasons of his time entertaining for the audiences.

In 1974, Astrodome Indoor and Daytona were the venues for the first season of this event. And the race was in two major types of bike such as 250CC and 500CC. In 250CC class, Pierre Karsmakers won the race and opened a new leaf in racing history.

In the 90th decade of the last century, Pace Motorsports, Mickey Thompson Entertainment Group, Super Sports, and SFX entertainment contributed a lot to make the race familiar among the country.

Since 1985, the event schedule was from February to November. And both the outdoor Motorcross and the indoor supercross were under the same schedule. In 1986, the organizers brought some changes to the schedule. And they declared the dates of this event from January to June.

The present calendar from January to May was adopted in 1988. And each of the 17 rounds takes place every Saturday of the calendar month. Since 2000, this event has been started on the early Saturday of January and getting closed in early May.

In 2013, both the American Motorcyclist Association (AMA) and Feld Entertainment decided to return to their traditional nomenclature like 450CC MX1 and 250CC MX2. And since then, we are familiar with the off-road bike race as the AMA Supercross.

Get Back to the AMA Supercross in the 1970s

In this particular decade, a new chapter was opened in the history of motorbike racing. The people of Los Angels experienced motorbike show with new dimensions, platforms, and tracks. For the first time in history, Pierre Karsmakers won the race of a 250cc two-stroke motorbike.

From 1974 to 1979, the six subsequent supercross events took place in this decade. Bob Hannah is only the racer who made a record of winning the race three times. And people regard him as the pioneer of making supercross popular across the United States of America.

Get Back to the AMA Supercross in the 1980s

This is one of the golden decades in the evolving history of the AMA Supercross racing championship. The organizers became able to arrange the event in each year of the decade. And the spectators enjoyed the stunning performance of all the new competitors.

The supercross lovers enjoyed ten events of the competition in this decade. Mike Bell inaugurated the winning chapter in the early of the decade. Rick Johnson and Jeff Stanton were the lucky racers to win the race back to back.

Get Back to the AMA Supercross in the 1990s

This decade was only for the racer of all time Jeremy McGrath. He proved the real power of a motorbike racer to dominate through the decade. Except for 1997, he unbelievably won each of the races from 1993 to 2000.

Jeremy McGrath made an unbeaten history that is still alive. He touched the toughest landmark of winning 6 seasons in a decade. Now he is an idol for the thousands of bikers of all the time.

Get Back to the AMA Supercross in the 2000s

Ricky Carmichael dominated the decade to win the race five times. He is the pioneer of the modern-day supercross racing championship. He won both the 125MC and the 250MX titles to prove his driving dexterity.

Out of the United States of America, Australian racer Chad Reed made history winning the race respectively in 2004 and 2008. It was outstanding to spread the popularity of the event out of this continent.

Get Back to the AMA Supercross till 2021

In the 450CC (formerly 250CC) class competition, the American racers have thoroughly dominated the decade. And for surely Ryan Dungey and Ryan Villopoto are the prominent persons in the present days’ supercross.

The bikers from Germany and France have pointed their positions at the 250CC West division in this recent past decade. Ken Roczen from Germany and Dylan Ferrandis from France made history for their respective countries by winning this class.

A History ahead of Golden Anniversary!

Since 1972, the Monster Energy AMA Supercross has been going through so many pains and gains together. This is the history of glory and this is the past of agony too. And it is also the history of innovation, motivation, and dedication.

A small step of once from Los Angels now a history of a long walk across the world. In this glorious journey, we find the supercross competition with so many changes at grounds, tracks, schedules, and vehicle types too.

Now it is an issue of prestige and pride to the racers and year-long cherish for the spectators to enjoy the world’s biggest racing competition. The organizers, racers, and spectators are ahead of observing the golden anniversary of AMA Supercross.

As supercross lovers, we need to know the real past of the glorious event. It will help us to evaluate the dedication of thousands of people to bring the competition at this present level. And the history says it hasn’t had the present status overnight.

This is the unyielding contribution of organizers, racers, and audiences across the world to touch this milestone. Along with the racers, the American Motorcyclist Association (AMA) has contributed a lot to making this off-road race familiar globally.

And passing a glorious history, this world’s competitive indoor racing is ahead of its 50th anniversary. Let’s celebrate the golden anniversary with the AMA Supercross 2022 event. Stay safe!